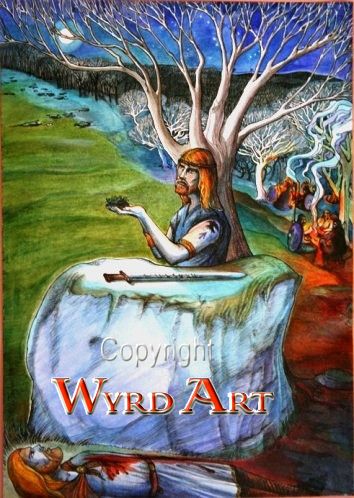 The Anglo Saxon chronicle names this revered place as the birthplace of the English nation.... The White Horse Stone stands near Aylesford Kent, and evokes the creation of an identity. It was here that the first battle between the invading warband led by Hengest and Horsa, brothers from Jutland, and the Brythons took place. This mysterious stone which resembles a horse,marks the site of the battle and also the grave of Horsa, who lost his life in this first attempt to claim the new land. In my picture Hengest gives thanks to Woden for giving him the victory and offers up a handful of the sacred earth of the new land called Engla land (land of the Angles)