WYRDART OFFER....ALL 4 BOOKMARKS SETS FOR HALF PRICE UNTIL DEC 18TH

A record of our outstanding heroes and ancestors from the earliest times. 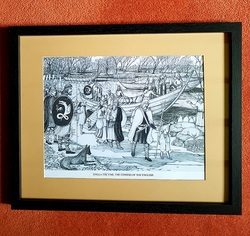 Engla Tocyme-The coming of the English in the 4th and 5th centuries.

Although the first main settlers came from Jutland and Angeln ( over 250,00 )in what is  now Denmark,many Saxons from Northern Germany also took passage to the decaying ex-Roman province of Britannia.They came by keel boats and possible sailing craft across the North Sea.

Now you can have your unique gift or presentation artwork mounted and framed and choose black or natural frame!

The picture shown is in an attractive dark wood effect frame ,mounted on fine art card,and protected by non-shatter, shatterproof polyglass .It has a hanging hook behind attached to a strong backing board. 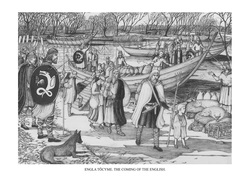 Engla Tocyme - The Coming Of The English c 5th CE

Arrivals from Angeln leave the keel boats in a new land.

When the folk from Angeln left their original homeland we are told by Bede thatit was completely deserted.The archaelogical record bears this out and from the migration period no cultural artefacts were found which show continuity of occupation.

The size of the influx is estimated at 250,000 making the Englisc the single largest ethnic group to cross the North Sea.

Although traditionally we have been asked to consider the 5th century to be the beginning of the major shift in population,and the roots of a Germanic culture overlaying the old Romano-Brythonic one this is now being questioned.

Using place names in Wiltshire i.e. Cerney, (the 'ey' means island in the germanic tongue) there is evidence that an ancient lake landscape whose original physical features were named in Old English had later been crossed by a roadway made by the Romans who came to Britain in 1st century CE.

It seems that some English were here for several centuries before the surge of the North Sea migration period. 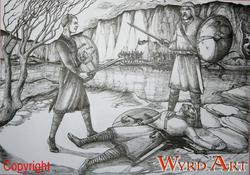 Offa I with his famous sword 'Steadfast'

The Angles lived in an area called Angeln.The words 'Englisc' and 'Anglisc' describe the Germanic tribe whose folk gave their name to England

Offa I was a warrior from childhood and lived in Angeln, Denmark in the 4th century. 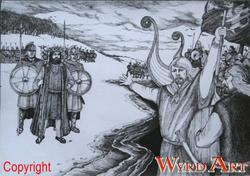 At the invitation of Vortigern, the Brython overlord of the Brythonic tribes of Britain, Hengist and Horsa,

Jutish warriors of renown arrived with 3 shiploads of warriors in order to defend the King's borders against the Picts.

I created this image having imagined the three ships arriving on the shores of Kent.

The English warband and fyrds were renown for the speed of their march.

It  took the army  just 4 days to march to Stamford Bridge, covering over 200 miles in order

to surprise Harald Hardrada's troops and win a crushing victory over the Norwegians.

Aelle is credited with the foundation of the kingdom of the South Saxons, or Sussex. He is said to have landed near Selsey Bill (in modern West Sussex,) in 477 and immediately made war on the Britons.

In 491 he and his son Cissa massacred a British garrison at the former Roman fort of Anderida (modern Pevensey, East Sussex). The 8th-century historian Bede wrote that Aelle was the first king to be recognized as overlord of all the English peoples south of the Humber.

Drawing on Bede, the 9th-century Anglo-Saxon Chronicle described Aelle as the first bretwalda (“ruler of Britain”).

TITLE IS SHOWN IN CAPITALISED ROMAN LETTERING in the lower border. 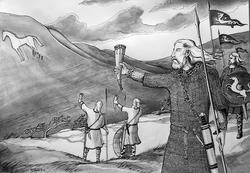 Cerdic has the Saxon white horse carved into the hillside. 519AD

Cerdic As with many of the early Englisc kings, little is known about Cerdic other than that written in the 9th century Anglo-Saxon Chronicles. According to the Chronicles, Cerdic left Saxony (in modern day north-west Germany) in 495AD and arrived shortly afterwards on the Hampshire coast with five ships. Over the next two decades, Cerdic engaged the local Britons in a protracted conflict and only took the title of King of Wessex after his victory at the Battle of Cerdics Ford (Cerdicesleag) in 519AD, some 24 years after arriving on these shores.

Beneath the illustration the title is shown in ROMAN CAPITALS

"Dear Mark, Further to our conversation, we would like to use your image "King Penda the last heathen King of Mercia" in the BBC Country Tracks programme, to illustrate an item we have filmed about Anglo-Saxon England. http://www.wyrdart.co.uk/index.

My colleague Richard Price at the BBC Photo Unit, will be in touch to arrange a copyright licensing agreement with you. In the meantime, please could you reply to this message with a high resolution copy of the image? " 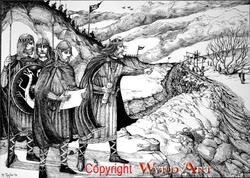 King Offa oversees the building of the dyke

Available as a high definition digital reproduction on impervious card.

Ragnar ( Hairybreeks) Lodbrok was a Viking leader and took part in many raids on France and England,culminating in sailing up the Seine and storming Paris .

After leading a life of warfare and violence ,Ragnar was shipwrecked on the Northumbrian coast, but although he and his crew survived the wreck , after meeting the Northumbrians in battle, most of his men were killed and he was captured by Aelle, King of Northumbria, who ordered him executed by throwing him into a pit filled with poisonous snakes.

Due to repeated raids by Viking armies, King Alfred gave orders to protect his kingdom of Wessex

by setting up the first English navy to harry the smaller longships as they entered coastal waters.

King Alfred's eldest daughter, and one of the most outstanding warrior leaders of her time during the resistance to the Danish invasion of England. Heading her army she reclaimed Derby and Leicester working alongside her husband Aethelred. 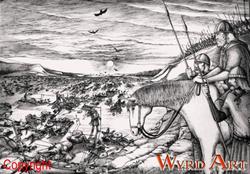 England 937 AD. Numbering thousands of elite warriors and huscarls, the battle of Brunanburh was fought in the west midlands probably somewhere on the coast of Cheshire.4 mighty kings were there; Olaf Guthfrithson, King of Dublin; Constantine II, King of Alba (now known as Scotland) and Owen, King of Strathclyde. 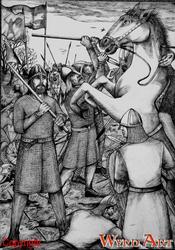 King Harold at the Battle of Hastings

This is my interpretation of King Harold's stand during the battle in which he was killed whilst wielding his long handled axe.

It is known that Edyth Swan Neck ,his partner of many years and mother of his children, identified his disfigured body.